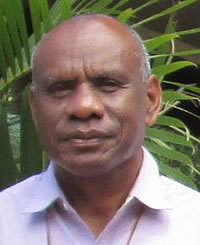 Following an 1890 Agreement between the different Christian denominations to evangelise separate geographical areas of New Guinea, the first Anglican mission began at Dogura near the south eastern end of PNG’s mainland. It later gave its name to the diocese that was formed in this area.

Dogura diocese is a rural and mountainous area of isolated villages with few roads, and a heavy reliance on dinghies along the coast for travel. Despite being similarly isolated, the original mission station of Dogura continues its significance with its magnificent cathedral of Saints Peter & Paul, Bishop’s house, Diocesan Office, Holy Name Secondary School and Hospital. The St Barnabas School of Nursing which is run jointly by the Anglican, Catholic and United Churches is located in Alotau, the only town in the diocese. 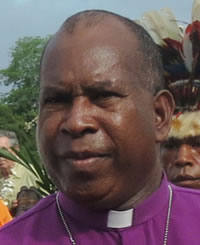 Popondota Diocese sees itself as part of PNG’s original Anglican heartland, being the area into which Anglican work spread northwards from Dogura.

It was along its coastline in World War II that the Japanese landed in 1942 and where many people suffered, including the Anglican Martyrs. It also suffered greatly during the 1951 Mt Lamington eruption.

The only town, Popondetta, is connected to a small port at Oro Bay by the one main road, which also continues up into the mountains to Kokoda and its wartime Track – the jungle footpath across the mountains to Port Moresby and which continues to be an attraction for physically fit tourists.

Popondota Diocese is the location of some of ACPNG’s major institutions – Newton Theological College, Martyrs Secondary School, the Franciscan Friary at Haruro and the Sisters of the Community of the Visitation at Hetune. The cathedral, bishop’s house and diocesan office are all located in Popondetta itself, while the Church’s Community Health Worker training facility and the recently rebuilt Anglican St Margaret’s Hospital are at Oro Bay.

Part of German New Guinea until 1914, Anglican missionaries originally came to the New Guinea Islands from Melanesia under the auspices of the Church in New Zealand. This, together with the island culture, gave its Anglicanism a distinctive flavour of its own. During World War II these islands were captured by the Japanese and have their own martyrs.

Anglican ‘areas’ are mainly confined to the southern and western coasts of New Britain, whose mountainous terrain confines most settlement and transport to the coast; while a pioneering sharing of churches between denominations has also emerged in some villages. There are also Anglicans in New Ireland and elsewhere, although connecting them up is hampered by the costs of travelling huge distances by boat.

Following the eruption on New Britain of the volcano in Rabaul in 1994, the bishop’s house and diocesan office were re-located to Kimbe. The diocese has established a couple of oil palm blocks there in order to provide some income. 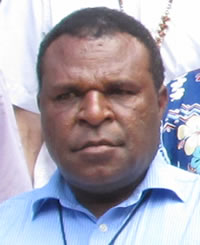 Aipo Rongo covers all of the northern half of PNG’s mainland. Like the islands, it was also part of German New Guinea, although evangelisation by Catholics and Lutherans was largely confined to the coast.

Most of its vast hinterland remained unexplored until the 1950’s, when the government gave the Anglican Church permission to start evangelisation in the remote highland areas of Jimi/Simbai and Siane. These remain Aipo Rongo’s Anglican ‘heartland,’ but are still heavily dependent on Missionary Aviation Fellowship’s (MAF) small aircraft to service its mission stations, since apart from the Highlands Highway that connects the port of Lae with the interior, there are few roads.

Anglicans are also found in the growing towns – Lae, Goroka, Mt Hagen, Madang and others.

Aipo Rongo has two Anglican institutions in remote locations: a High School at Aiome in Madang Province, and Kerina Evangelists College at Tsendiap in Western Highlands Province. The bishop’s house and diocesan office are located in Mount Hagen, which is also MAF’s headquarters: many of the bishop’s patrols must be done by air or on foot. 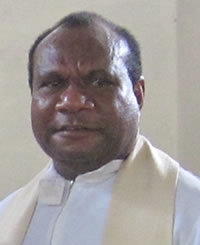 Port Moresby Diocese covers most of what was formerly British Papua – the southern half of PNG’s mainland from Indonesia in the west to Milne Bay Province in the east. Although it has no historical Anglican ‘area’, there has been an Anglican presence in the city since the 1900’s, with the Cathedral celebrating its centenary in 2015.

The first Anglican Franciscan Friary outside England began here in the 1950’s, and with increasing numbers of people from Anglican areas coming to work in the city, 7 urban parishes have evolved to cater for their needs.

The diocese also cares for Anglicans working in other towns, or on rubber plantations and in mines far from the capital. It has also recently taken on the pastoral care of some remote settlements lacking any facilities in Gulf Province.

With the arrival of many more Western goods, services and attitudes, a fast-rising population struggling to survive (often in squatter settlements) and an increasingly visible gap between rich and poor, pastoral work is complex. The Diocese began pioneering work in HIV/AIDS awareness and treatment with its establishment of Anglicare as a service to the general community. Almost wholly funded from external sources including the Australian government’s Church Partnership Programme, it has now set up a Foundation to raise its own funds and become less dependent on donors.

The bishop’s house and the diocesan office are located in the northern suburb of Waigani in a large compound where Anglicare’s headquarters, and some other staff housing also surround the central Chapel of The Good Shepherd.

ACPNG’s National (Provincial) Office is being re-located from PNG’s second city of Lae to Port Moresby, in order to have easier access to facilities only available in the capital. The Anglican Education Services office, which looks after the 200 Anglican schools across the country, has been based at the Begabari compound for some time; while the Anglican Health Services, with facilities in all dioceses except Port Moresby, is still currently in Lae. 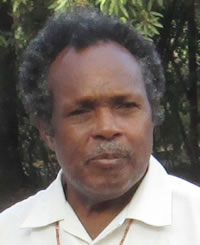 The Archbishop’s house and office are now also sited within the Begabari compound, the current Archbishop of ACPNG being The Most Rev’d Allan Migi. 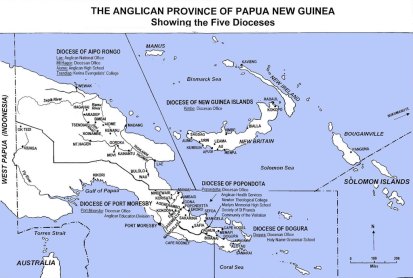